I fully understand that teaching is repetition. So again I repeat: the clitoral body is the primary source of orgasm whether it's stimulated externally, internally, or both at the same time. I prefer both. Once a woman understands she can have both clitoral stimulation with vaginal penetration, it ends this discussion. 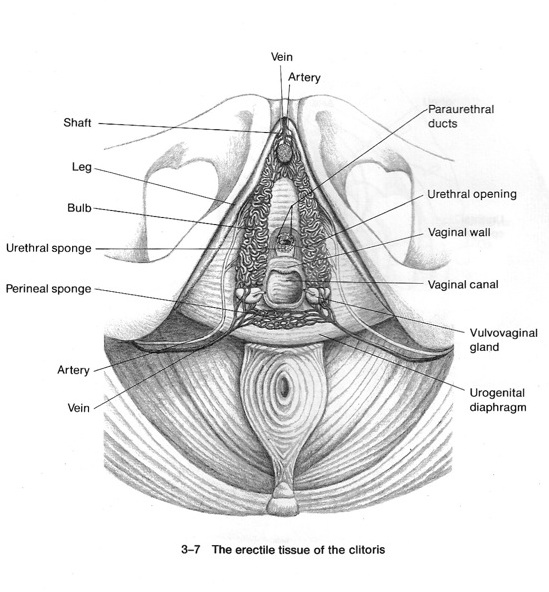 At first, young and old women were asking me how they could learn to ejaculate. Recently, I've been asked how can I stop gushing during sex with my partner. After searching thousands of website that describe how to female ejaculate, no where could I find information on how to stop female ejaculation. Instead I was advised to get protective mattress covers and more towels are recommended. No where could I find information on stopping this response for those who find the clean up afterwards a drag.

"A vaginal orgasm" is also indirect clitoral stimulation considering the internal structures of the clitoris. The erectile tissue of the legs and bulbs fill up with blood and become erect during vaginal thrusting with an erect penis/dildo/fingers for up to thirty minutes or more. Also to consider is indirect clitoral stimulation when couples bodies press together. Many women discover that getting on top allows her to press her clitoris into her lovers body.

Following all this complicated physical information, we have to include the mental and emotional state of being "in love." Romantic Love has been described by some feminists and philosophers as "temporary insanity." Unfortunately, it's the most popular sexual fantasy for the largest number of girls and women all over the world: "Some day my Prince Charming will come."

What's left out of this conversation is the following information: A woman's erection takes twenty to thirty minutes of adequate clitoral stimulation for her entire vulva to become engorged. The operating word here is "adequate" and will vary from woman to woman.

Unfortunately, intercourse rarely if ever lasts long enough to engage the internal clitoris. We forget that for every pre-orgasmic woman there's a premature ejaculating man. This is one of the primary reasons why men don't want to know what women want because it would require them to make an effort to learn "come control" which sounds like another job and he's already overworked.

We now have the horrendous job of sexually educating a world that's under the influence of violence with militant religions and corporations intent on dominating the world. Still, some of us continue to hope that "Mankind" will give peace a chance. Otherwise women will have to take over before we can embrace the Pleasure Principal with Equal Rights and Orgasms for all.