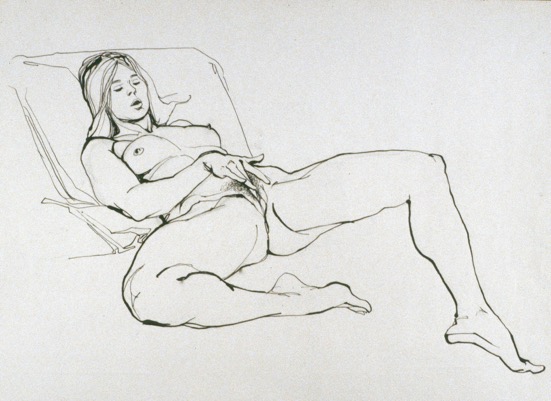 As kids, the idea was to come fast to avoid getting caught. If we were lying face down, mom, siblings or the baby sitter couldn't see what are naughty little hands were doing.

First let me emphasize, there are a gazillion ways to get off and there's no such thing as having a "wrong" kind of orgasm.

After years of observing my own orgasms plus all the women I've known personally and have worked with professionally, I've observed four basic categories: Pressure, Tension, Relaxation and the Combination that I call a "Rock and Roll Orgasm." This one combines elements of the first three. While breathing fully during a buildup, we are squeezing and releasing our muscles rhythmically with direct or indirect clitoral contact. Pressure or Tension orgasms are most often reached by holding our breath and gasping occasionally. Total relaxation orgasms or what I've also termed "Sleeping Beauty" are most rare. To remain totally relaxed while breathing deeply, someone else must do genital stimulation in a manner that is nearly perfect. Ha! If you find that person capture them quick!

While no two orgasms from self-stimulation are precisely the same, most women use some form of direct or indirect clitoral stimulation with or without penetration. The body responds with movement, no movement, along with varied breathing patterns from holding the breath to panting. Other women remain utterly silent while others make a variety of sounds. The mind can be paying attention to what the body is feeling, focused on sexual thoughts, or conjuring up a sex fantasy. Just as long as you're not planning a dinner menu or running the laundry list.

Pressure Orgasms: (No hands). One workshop woman said she pressed her clitoris against overstuffed furniture. Another pressed against the hard nose on her teddy bear. Some little girls squeeze their legs together to get those good feelings. Other's say wearing tight jeans got them off and more than a few were very fond of their bicycle seats. As a preteen, I was crazy about riding horses before I got interested in boys. Some women who grew up with a strong prohibition about touching themselves directly made a transition to stronger orgasms by letting water run on their clitoris from a bathtub faucet. I began rocking on a pillow pulled up tight between my legs until the "tickle" went away. At some point I just naturally segued over to my fingers and assumed everyone did the same. Not true.

Tension Orgasms: Direct genital rubbing combined with muscle tension gets most of us through puberty, into young adulthood, and for some, throughout the rest of their lives. Tension Orgasms rely on leg and buttock muscles being squeezed tight with the rest of the body held fairly rigid. While holding the breath, a fast motion is used on the clitoris or penis until orgasm explodes in a quick burst. These fast tension climaxes are silent and many of us grew up masturbating this way to avoid getting caught by our parents or siblings. These quick tension orgasms often carry over into many men ejaculating prematurely during partnersex.
A few women have orgasms with muscle tension only without any direct genital contact.

Most people claim to be too busy to spend any quality time enjoying sex. So it will come as no surprise when I say Tension Orgasms are the most common for the largest number of people. While there is no such thing as having a "wrong" kind of orgasm- some are definitely better than others. When a person spends more time building up sexual arousal by breathing, moving, and allowing the body to express a little joy with sounds of pleasure, it creates a more joyful and satisfying experience with orgasm. Fast sex is like fast food- it takes the edge off hunger but it's not all that nourishing.

Relaxation Orgasms: These are difficult to achieve alone because it's nearly impossible to be totally relaxed while doing some form of genital self-stimulation. My relaxed orgasms first happened in my teens with manual sex from a boyfriend's delicate touch. During long sessions of kissing and genital fondling, I was the classic Sleeping Beauty. To avoid exhibiting "animal-like" behavior, I kept releasing the build-up of sexual tension by consciously relaxing my muscles. This took concentration but I felt my reputation was at stake. At one point when I could hold back no longer, the orgasm would come and get me. As long as I did nothing to make this happen and he didn't put his penis inside my vagina, I was still considered a virgin.

The best way to experience Relaxation Orgasms is with a partner. A few teachers of Eastern sex practices have their students take turns giving and receiving manual genital sex with explicit verbal guidance telling one another exactly how to vary the stimulation. They are taught to slow down, relax the pelvic floor muscles, breathe deeply and allow their sexual energy to build gradually. Rajneesh, a Tantra teacher from India, called this a "valley orgasm"- sinking down into the sensation instead of building up as in a "peak orgasm," which is what I call a Tension Orgasm. Rajneesh believed that sex in the future would involve more fun, joy, friendship, and play than the serious affair it is now. I totally support this image. Both Rajneesh and Wilhelm Reich ended up in jail- an indication of how different ideas about sexual pleasure threatens insecure American men.

Combining these five elements- clitoral stimulation, vaginal penetration, PC muscle contractions, pelvic thrusting and breathing out loud makes the combination orgasm the one that translates most easily into partnersex. During intercourse, the woman or her partner simply adds her preferred kind of clitoral contact. In my opinion, the best approach is when a woman controls her clitoral stimulation the same as a man does with the angle and speed of vaginal thrusting. Sharing mutual orgasms combines the best of both her and his worlds creating more harmony between the sexes.