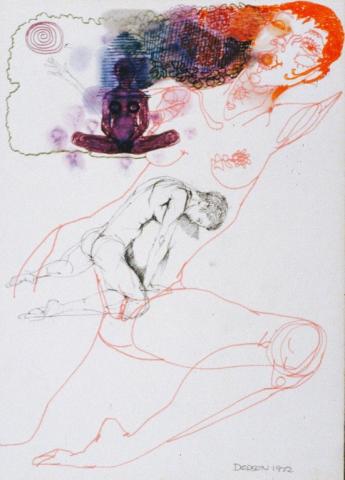 Thousands of years before the time of Christ, the cannabis hemp plant was Earth's largest agricultural crop that produced the majority of fiber, fabric, lighting oil, paper, incense and medicines. Hemp was also the primary source of essential food, oil and protein for humans and animals.

From 1776 until 1937, hemp was a major American crop that supplied textiles, paper and medicines. This hardy plant grows 6 to 8 feet tall in one season and sends oxygen into our atmosphere. Using hemp could slow down deforestation that also provides our atmosphere with oxygen along with all the other material goods. So we might wonder why America would declare war on such a beneficial plant.

A week before the show, I took a night off to spend an evening with my old friend, Joe Rubin, a big, good natured guy everyone liked. We'd gone to a couple of sex parties together and Joe always got stoned and spent most of the evening on his back with an impressive erection pointed toward the ceiling. When I arrived at his apartment, Joe always asked if I wanted to share a joint and I always said "No thanks." However, this time I hesitated a moment. That’s when he reminded me that pot had become a middle-class high. Abby Hoffman lit a joint and smoked it on national TV. He said I owed it to myself to try it at least once. While it was true I’d been thinking about it, after ten years of not drinking alcohol, I liked being clear headed. Then suddenly I surprised both of us by saying yes.

Joe rolled two joints. He said it was difficult to tell what being "high" felt like for a first-timer but after we’d finished the second joint, indescribable sensations began to travel the length of my body. First my face felt like it was cracking apart. I had to look in a mirror to see if I was okay. Joe said it was my muscles relaxing. Next I stretched out on the bed and begin laughing at everything he said. When he slipped earphones over my ears, suddenly The Moody Blues were inside my head with sound in every cell of my body. I became the music. I climbed on top of Joe’s sturdy cock, and closed my eyes as I imagined fucking the entire group. My body easily followed the musical composition as I moved in time with the beat, riding his hardon, pressing into his body and rubbing my clit with wet fingers. I was form following function. I came when the music came and as I floated in the afterglow, the universe echoed our stoned libretto.

I had experienced an eternity of pleasure, traveled endless realms of delight, but when I looked at the clock, only twenty minutes had passed! I told Joe his clock had stopped, but he laughed and said my brain had just gone on vacation. It was called being “spaced out.” Then he left the bedroom and returned with two frozen Powerhouse candy bars wrapped in paper napkins. With a big grin, he announced, "Dinner is served." Side by side, we lay in bed listening to the Moody Blues album, savoring the texture and sweetness of the candy bars made more exquisite by the high. The magic herb had allowed every one of my senses of touch, sound, sex and taste to receive maximum pleasure. No wonder marijuana was illegal. If the entire country got stoned, it would put an end to capitalism! The next day I felt wonderful. No hangover, only a feeling of being rested with a lovely memory of euphoria.

Marijuana was even better than I’d expected. At first I was only comfortable getting high in a safe environment preferably at home. I enjoyed exploring my orgasms alone or with a lover while pot slowed down my brain waves and enhanced my senses. I never got high when I organized a party because there was too much to keep track of. The same was true when I ran a workshop. Although I supported the use of marijuana and spoke of its benefits with women in the groups, I had also learned that some people got paranoid once they felt a loss of control. When that happened, they needed a baby sitter until the high wore off which took several hours. Besides, I believed that learning something new is always better with a clear mind. This is still true to this day. It’s unfortunate that kids start smoking pot so young. It seems to me that it’s the perfect middle-aged drug to help adults escape their nagging mental processes and get back into their bodies and senses.

Throughout the decade of the 70’s I was an ageing hippy enjoying weekend highs with the Magic Herb. When I learned Mother had glaucoma, I taught her how to smoke pot using a bong. It greatly helped with her pain management. After that trip, I would mail her rolled joints in a box of cigarillos whenever she ran out. Mother was so impressed with this healing herb that she made several donations to NORML. Marijuana has been available throughout the bogus war on drugs. Talk about a ridiculous law! If pot and prostitution were made legal and the rich paid taxes, the US deficit would quickly disappear.

When I turned fifty in 1980, I particularly appreciated marijuana at the beginning of menopause. But the following year when I began to write a sexual memoir, I stopped getting high to keep my short term memory sharp. I was dedicated to documenting my sex life as a sex positive feminist. After discovering I couldn’t sell the memoir, I began producing videos as we entered the 1990’s. Toward the end of that decade, I again embraced marijuana to help with pain management as I suffered degenerating hip joints with bone grinding on bone with every step. After I had bilateral hip replacement at the age of sixty-seven, I was a born again hedonist.

So why did the American government declare war on a plant? Will it surprise you if I said it was about corporations, money and lying politicians? After prohibition ended, the US government had a lot of federal officers who were out of job. So the Federal Bureau of Narcotics (FBN) was created to put an end to the use of marijuana. The four main players that wrote and passed this absurd 1937 law was Senator Henry Anslinger, who was up for re-election, and the money men were William Randolph Hearst, Andrew Mellon and the DuPont family.

The decision of Congress to pass the Marijuana Tax Act of 1937 was based on hearings held behind closed doors. In 1936 the Federal Bureau of Narcotics (FBN) drafted a legislative plan for Congress, seeking a new law. The head of the FBN, Henry Anslinger, ran a campaign against marijuana seeking re-election. His buddy, William Randolph Hearst’s newspaper empire (much like Rupert Murdock today) published articles that demonized the cannabis plant. They claimed that smoking marijuana led to violent crimes, insanity, women having sex with Negroes, and a general decline in morals. The obvious goal was to destroy the hemp industry. Today we all laugh at the popular movie back then called “Reefer Madness.”

With the invention of the decorticator, a machine much like the cotton gin, hemp was a cheap substitute for paper pulp used in the newspaper industry. Hearst knew it was a threat to his extensive timber holdings. Andrew Melon, who was then Secretary of the Treasury and the wealthiest man in America, was also heavily invested in DuPont’s new synthetic fiber nylon that would replace the traditional resource of cloth from hemp. Thanks to the combined efforts of Hearst, Mellon and DuPont, the “good ole boys” succeeded in getting what they wanted by denying the American people access to the truth. Sound familiar?

Today we now have medical marijuana in some states. With a doctor’s prescription, a person can legally purchase a high grade of marijuana for whatever ails them. Anyone interested in this incredible plant can Google "The Great Marijuana Conspiracy." The use of marijuana has been considered sacred in many cultures with a long history of benefiting spiritual practices. Even as recent as the 1920’s here in the USA, cannabis was used as a medicine for many ills. One popular recommendation was for women with painful periods or a menopause that was difficult. Today Medical Marijuana has proven to be a miracle herb for many ills but we remain controlled by our out-dated war on drugs. It seems that American politicians only know how to declare war not to make peace or make any progress. Congress needs to smoke some weed, chill out and enjoy some stoned sex. What a difference that would make!

In my opinion, of all the recreational drugs, marijuana is the sweetest and most beneficial one. The dangerous drugs are pharmaceuticals and they are sold legally. I can barely believe my ears when I hear a prescription drug advertised on television followed by announcing possible negative side affects, albeit very fast. Good grief, it’s enough to scare any thinking person. The people who go for these drugs must believe the warnings don’t apply to them or that they’ll beat the odds. Big corporations have nothing but profit in mind and we don’t stand a chance unless we come back to our senses— actually! Now more than ever before, we need a healthy population to stand up to a government that is of, by and for the multi-national corporations.

America’s war on marijuana smokers has been successful in creating an atmosphere of self-censorship quite similar to censoring sexual and religious diversity. Speaking out about the cannabis plant in any positive way continues to be considered taboo. Since I’ve spent the second half of my life speaking out about another taboo subject— masturbation, I’ve often gone public and shared the benefits I’ve experienced with marijuana. Once a person becomes an octogenarian, the amount of freedom some of us feel makes growing old worthwhile. Besides, I doubt the US government will bust a well-known Ph.D. sexologist like me— if they do, just remember, you can’t buy that kind of publicity!