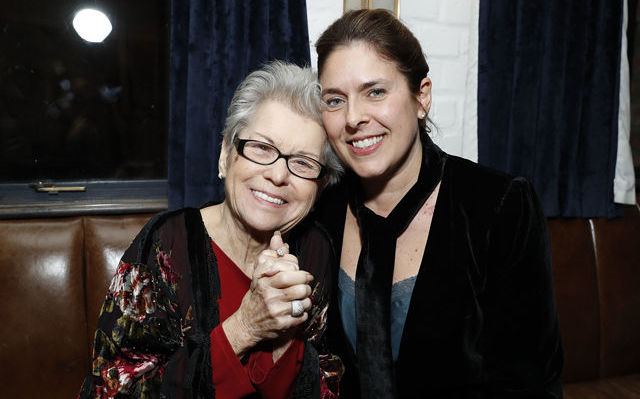 The Pleasure is Ours I can't describe how it feels to watch yourself display your vulva and orgasm on a theatre screen the night before its released on an international media platform like Netflix.  It was surreal and amazing.  I've never been more proud of Betty and me, our work, our Bodysex leaders or womankind.  I love you all.

There hasn't been one negative piece of press.  In fact, our episode The Pleasure is Ours has only been described with the most glowing terms.  And then there's "The Dodson".  She is finally being recognized for the true revolutionary that she is...here are my favorite press moments:

Refinery 29 on the Orgasm Scene:

Netflix has a global audience, she adds, and “in my mind, I’m imagining young women all over the world watching this. Would I have made different choices in my 20s, if I’d realized my body was normal and known how to give myself an orgasm, and known that everything was okay and I was supported?” she asks. “Probably!”

In the episode, called “The Pleasure Is Ours,” we meet feminist sex educators Betty Dodson and Carlin Ross, who have coached thousands of women on orgasms. One Goop staff member participates in their workshop, while others take a crash course in body positivity, learning to celebrate their sexuality in ways that are meaningful to them, not just their partners.

Along the way, Dodson and Ross extol messages about the need for women to understand their own bodies, and explain the crucial difference between the vulva and vagina. (The vulva is external — the part you can easily see; the vagina is the internal part, where a tampon might go.)

In a scene showing a series of vulvas in many different shapes and sizes, we get a genuinely educational look at women’s anatomy. And these are the vulvas of real women, not just the touched up, pink ones showcased in pornography. The point is that there’s lots of variation, and no single ideal form.

The New Yorker on Betty's amazingness:

And yet, when “The Goop Lab” winks at its own absurdity viewers are in more danger of being entertained, even moved. “The Pleasure Is Ours,” an episode about female orgasms, is great TV and genuinely educational, largely thanks to the charismatic and rightly militant ninety-year-old sex educator Betty Dodson, who, since the seventies, has led group workshops for women determined to find sexual satisfaction, in which she requires that they study their own and one another’s vulvae. (“We used to say that a woman had to learn how to ‘run the fuck,’ ” she says.)

Stuff on how our episode won over an "actual gynecologist":

The episode features 90-year-old sex educator Betty Dodson and her business partner Carlin Ross, who begin by schooling Paltrow on the difference between a vagina and a vulva.

"The vagina is the birth canal only," Dodson explains.

"You want to talk about the vulva, which is the clitoris and the inner lips and all that good s... around it."

A series of photos of real women's vulvas are later shown as part of a "genital show-and-tell" session.

Smart said in her own practice, she often used resources like the "Labia Library" to dispel common myths about female anatomy, and praised Paltrow's show for employing a similar tactic.

"We're seeing a rise in women seeking cosmetic revision of their labia, wanting to change the shape or size of what is essentially normal genital anatomy," she said.

"Often all they need is reassurance. I thought it was really good to show the wide variation in labial appearances."

Dr Olivia Smart was "pleasantly surprised" by the female pleasure episode of The Goop Lab.

Another groundbreaking moment sees Dodson explain her "rock and roll" orgasm technique, with Ross giving a demonstration — and achieving an on-camera climax.

"Some people may feel shocked or affronted by seeing female orgasm on television," Smart said.

"But it challenges the status quo and it brings down the walls and the stigma that's associated with it."

The Cut (my favorite so far) on the educational value of our episode:

The advice offered in the episode is simple and practical; it’s designed to reduce shame and maximize pleasure. Dodson and Ross describe how to use your breath and pelvic muscles to have a better orgasm, and talk about how to ask for what you want during sex. They encourage women to get familiar with their own anatomy, describe different kinds of orgasms and how to attain them, and discuss the myth that they can be achieved without effort.

And there are parts of the episode that feel remarkable. There’s a montage of high-definition images of vulvae in a wealth of shapes, colors, and sizes, and a scene of Ross studying her own vulva in a mirror, under Dodson’s supervision. On camera, Ross points to its various parts: the clitoral hood, the clitoris, the glands. “That’s where it’s all taking place, kid,” Dodson drawls.

The show does right by vaginas, for perhaps the first time since Goop’s inception. And unlike the usual Goop fare, after watching, I came away feeling better informed than when I first sat down, particularly when it comes to — as Dodson puts it — “running the fuck.”

ABC News on how our episode "shines on women's health":

The success of this episode is, in large part, thanks to Betty Dodson, a 90-year-old feminist sex educator and her colleague, Carlin Ross, who run workshops that aim to empower women with knowledge about their bodies.

Dodson notes that many women feel shame or embarrassment when it comes to sex, and most of the episode is spent trying to counter this.

We get a rare and welcome glimpse of diverse, naked female bodies of all ages, and, more radically, a montage of vulvas, to demonstrate the diversity of female genitalia.

The episode culminates in Dodson coaching Ross to achieve an on-camera orgasm, in a way that is educational, realistic, and not fetishised.

The whole approach is unabashed, yet sensitive, and feels genuinely refreshing. It left me wishing Goop would do this all the time: promote the message that vaginas and vulvas are great just as they are.

Vulture on how we filmed my real orgasm:

While she masturbated, Ross said the room was pin-drop silent. They shot the scene in one take. “Everyone was really watching. Not watching like when you feel leered at when you’re walking down the street and you feel that up and down. It was a real kind of respect and curiosity,” she said. When Ross finished — it took about ten minutes for her to reach orgasm — the entire room applauded. Ross laughed and said she’d entirely forgotten when I asked her what hearing that felt like; the day had been very draining for her. “Afterward, I was done. I’ve had an orgasm after tequila. I put on my clothes and said, ‘I’m sorry, but I’m going to bail. I love you all, but it’s bedtime.’” Dodson, meanwhile, smoked a cigarette.

The London Times on Betty's new found "tv star" status and the birth of Bodysex:

From those casual, organic, orgiastic groupings grew the idea for the BodySex workshops, which she sees as “totally” a feminist act, although different from those of other, contemporary “very conservative” feminists, such as her old friend Gloria Steinem. “It was all, ‘We want change, but we don’t want to upset anyone, we don’t want to rock the boat too much.’ Dodson sighs. “You’ve just gotta go out there and make a mess.”

The Huff Post with the ultimate title: "Carlin Ross Wants You to Have an Orgasm so She Gave Herself One on TV"

When they showed my vulva on the big screen at the premiere of the episode, I grabbed Betty’s hand and was like, ‘It’s so big!’ But then you laugh and go, is it such a big deal? You go into the Met and there are penises on every statue, penises everywhere. Everyone’s sending you unsolicited dick pics. It’s like, ‘Was it so crazy over-the-top?’ It was, but it shouldn’t be.

Thank you for all your support - it feels like we're on the verge of a major feminist transition. We need to make tees that say "Run the Fuck" - Betty Dodson.

Comment
So sad when I learned Betty had left us. She will always be remembered and will live on through each and every orgasm I enjoy, as she would have wanted it.