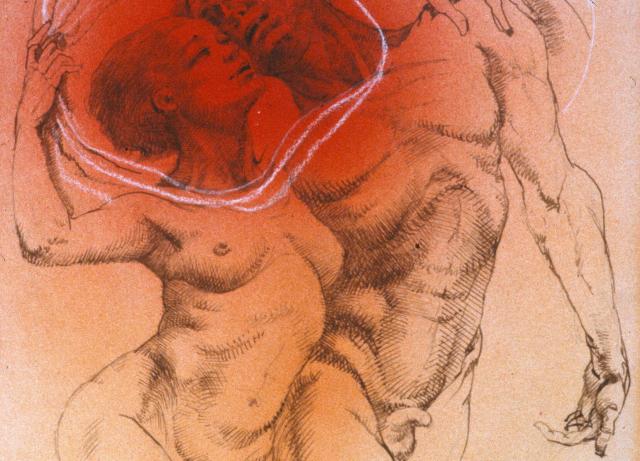 Amazing how I continue to learn something new thanks to “Ask Dr. Betty” on our D&R website. Many times a questioner will ask something I know nothing about. That’s when I head over to my Google god and begin searching— so easy! Not like having to pour over big reference books in some musty library.

While female ejaculation explains urinating during orgasm, expelling fecal matter with an orgasm is a whole different proposition. I’ve heard of “Scat Play” which deals with shit during sex alone or with others, but I’ve never discussed this with anyone who’s actually experienced this. The closet I ever got to “Scat Play” was back in the sixties when I had a date with a cute guy who wanted me to shit in his mouth. Knowing my finicky bowels, I could not have managed so much as a fart. But I blindfolded him and after squatting over his face making grunting sounds, I plopped a spoonful of Jiffy’s peanut butter into his mouth— A for effort. But I was never able to determine if he was just challenging me or was it true that he really did “eat shit” during sex with a partner.

Then Goddess Bless Google! Lo and behold, I’m offered a porn site that shows a woman defecating on her partner during sex. She is on top with her behind facing him, and us, while he gently penetrates her anus with his index finger. However, the main action is him massaging her ass cheeks rhythmically and firmly by moving them apart. I couldn’t tell for sure, but I think she was sucking his dick at the same time. After a few moments of him spreading her butt cheeks, a soft lady-like turd dropped from her asshole landing on him, then another, followed by what I would consider a healthy bowel movement.

OK, I’ll admit it; I was both stunned and a bit envious. Finally he inserted his finger to check if the lower bowel was empty, then he deftly wiped a little poop off his finger on top of her behind. The end!

Now before you freak out with my favorite Matriarchal comment, “That’s disgusting!” Consider this as the ultimate form of intimacy. Yeah! Like the word “intimacy” seems to be a favorite approach for many therapists to explain what’s missing in a couple’s sexlife. This is some primal stuff, folks. So now that you’ve recovered your composure, let’s take a look at these recent questions about pee and poop during female orgasm.

One: “Dear Dr. Betty, I never use to have a problem but I am finding with my new boyfriend the orgasms are so intense that I poop during them. He keeps telling me it's no big deal but it is very embarrassing and of course causes an interruption during the heat of the moment. We tried a butt plug but I shot that right across the room! I've tried upping my fiber to bulk up my bowels and it didn't help. Have you learned anything new about this since the 2008 post? I desperately want to solve this.”

Two: “A few months ago, I developed spontaneous orgasms. During sex, I can keep having orgasms every few seconds for HOURS...a fun situation, but unfortunately, the intensity of these spasms cause a bit of poo to pass out of my butt...I wish I had found an answer on this site. I will try kegels, but if my orgasms get any stronger, I don't know what might happen...as it is, I can shoot fluid a couple of feet into the air...seriously. I have become quite preoccupied with sex, so this is a constant annoyance. Any further advice besides kegels?”

Three: “All my life I've had difficulty reaching climax. However, I started squirting just after turning 50. Since then my orgasms have become incredibly frequent and intense. So, intense it pushes out poop. My husband tells me, when he is inside, that my vaginal wall squeezes much harder than ever before, it has actually been too tight during climax. I can tell a difference, too. I reach multiple orgasms without much effort at all. As much as I like finally having easy orgasm, I don't like pooping as a result. I have actually kept myself from climaxing since this has started. I feel like I'm never going to experience a normal sexual response.”

The fact that #One was able to shoot a butt plug across the room indicates a very strong pelvic floor muscle. No age mentioned and no info on the type of stimulation being used. To balance out her strong PC muscle, she would benefit from doing “Squats” to stretch and relax her pelvic floor muscle. Many women believe working the pelvic floor muscles will automatically lead to orgasms from intercourse. While this might happen for a few, we also need to know how to release the PC muscle to maintain a balanced pelvic floor. To release tension is where “Squatting” comes in. Just imagine washing clothes on a river bank. This position elongates the muscle allowing them more elasticity. Many women are over zealous with Kegel exercises. They forget all muscle groups need both tightening as well as releasing. When I say “squeeze” it’s followed by “release.” To check your muscle’s strength, simply insert your finger to feel the grip. But how do we check to see if that same muscle can relax? Chronically tight PC muscles will cause painful vaginal penetration and working with a pelvic floor practioner is very worthwhile.

To locate this important group of muscles, simply stop the flow of urine. That’s it! Lift up and then release. Men have the same set of muscles that will affect the quality of their erections as well as the intensity of their orgasms. Awareness and conscious use of this muscle during all sexual activity will not only add pleasure to our sexlives but it will also prevent urinary incontinence that plagues too many senior citizens. Leaking urine is more common than people realize.

Very perceptive of her! We all know some men can be “heavy handed” when touching women’s genitals and only a few think to add additional lubrication. I recall in my youth how impossible it was for me to say anything to my boyfriend who unknowingly was causing pain instead of pleasure. Protecting the male ego seems to be in our DNA. Also, all men adore creating a response in a woman which explains why most actresses scream during their faked orgasms in porn. Commercial sex is more about his performance rather than her pleasure. Since so few women dare to be honest in bed, this will not change.

Woman #Two claims she’s “having orgasms every few seconds for HOURS” but those are quick reflexes, not orgasms. Remember, none of these women are sophisticated sexually nor have they had any past experiences with orgasms. Please note: The clitoris was never mentioned by any of them.

The erectile tissue surrounding the urinary tract has many tiny prostate-like glands inside and was misnamed a “G Spot” when it’s an area, or better yet, a sensation. Since the male sex organ develops from the female, we must have everything men need. The prostate gland is very important because it creates alkaline semen so millions of spermatozoa can swim through our acidic vaginal canals in the hope that one penetrates a fallopian tube for impregnation. Although Earth is seriously over populated, the continuation of our species remains a strong impulse that partially explains “mankind’s” obsession with ejaculating inside vaginas as well as “womankind’s” obsession with being penetrated. It’s hard wired and no wonder why both sexes would expect the end pleasure of orgasm to be mutual, but alas, it’s not true. Like everything else of value, sex is an art form that must be learned and then practiced. The basics begin with a practice of masturbation.

At the risk of sounding like a broken record, I would recommend all of these women to begin exploring their own sexual responses with masturbation. They need to get in touch with clitoral stimulation which remains our primary sex organ for pleasure. Yes, I know, some women come from fucking only, but generally speaking, vaginal penetration is more often a secondary form of stimulation for women. However, we are routinely subjected to the male model of sexual response— a penis thrusting inside a vagina. This not only serves as the highest pleasure for men but it’s the procreative model that’s hard wired in both women and men to continue our species. It’s well past time for humanity to separate procreation from recreation sex, especially for the sake of women’s orgasms. Repeated experiences with mutually orgasmic pleasurable sex are the best antidote to violence. Sex is after all, the life force and that includes orgasms for both you and me.

As for pelvic floor muscles, to enhance sexual sensations we lift or pull up. To escape or ease up on a sensation that’s too strong, we bear down, or push out. In the process of escaping vaginal pounding or rough handling of our genitals, pushing out or bearing down with the pelvic floor is a form of self defense. It’s easy to see the release of urine would be automatic. Also given that bearing down is part of many bowel movements, poop might appear. One of the important aspects of building more pleasure in our orgasms would be to understand this important group of muscles that acts like a sling to support the important organs in our pelvic bowel.