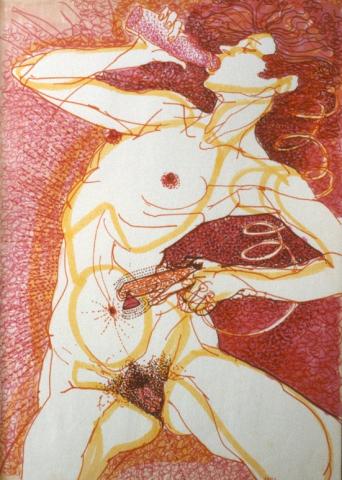 According to thousands of sex questions I’ve received during four decades, I’m aware of America’s profound lack of understanding when it comes to the basic act of heterosexual intercourse. Yes! Something we all take for granted, yet society could benefit from some very basic sex information/education to better understand what actually takes place when a penis penetrates a vagina and begins thrusting. This is the most frequent form of sexual activity that takes place between two people, straight, gay, or bi throughout the world.

My least favorite expression exposing society’s tragic and universal repression is when people refer to sex as “sleeping together.” However, this term aptly describes most if not all monogamous marriages where sex disappears and couples continue to share the same bed. Today I prefer the term “fucking” which has become universal in every language. The word also expresses a vast range of emotions from “fabulous” to utter “awfulness.” Whenever someone says, “Fuck you!” I get out my cell phone hoping to make a date!

First Fact: Penis in Vagina Intercourse (PiV) is a primary sex act for both humans and animals. It’s Mother Nature’s design to further her species. Therefore, the drive or desire for PiV procreative sex is hardwired in both males and females. We’re born to fuck and reproduce except for a minority who remain childless.

Fact # Three: Even without end pleasure of orgasm, women desire PiV sex. Most say they enjoy the closeness and being vaginally filled by a penis. One friend said PiV sex had its own magic when an unfathomable “chemistry” overwhelms two people with unexplainable force. Women also enjoy the power to make a partner happy or to deny him access to her vagina as punishment. PiV sex can be an exceptional joyful experience while many will go a lifetime experiencing zero sexual pleasure from fucking.

Planned Parenthood states 1 in 3 women have trouble reaching orgasm while having any kind of sex with a partner and 80% of women have difficulty with orgasm from vaginal intercourse alone. I believe the percentage of vaginal orgasms is far less due to the vast number of women faking orgasms. Some pretend to come to keep their partners happy. Others want to conceal their lack of sexual skills. My favorite is the woman who said if she didn’t fake an orgasm her husband would have a heart attack! He was so committed to giving her an orgasm that he wouldn’t stop fucking until she climaxed which she knew was never going to happen.

The following is a recent case study that demonstrates the problem of a young 23 year old wife who has suffered with painful vaginal penetration. “Sex seems great until my husband of six years starts thrusting. I feel a mixture of pleasure, but then soon, a growing tearing and burning pain cuts sex short.” The fact her suffering has gone on for six years is difficult to imagine.

At age 16, my first intercourse was rape.

First problem is that neither the girl nor boy is aware of her clitoris that seldom shows up in porn. Besides unintentional rape, she also becomes a potential victim of an unwanted pregnancy if they haven’t discussed birth control. It’s a wonder either one would ever “go all the way again.” Yet the sex drive remains strong, especially in boys who at least get to ejaculate. So they both will do it again and again while the same disastrous results remain consistent for girls! We know a sure sign of insanity is repeating the same mistake over again and again while expecting a different outcome! That pretty much sums up female sexuality for young girls and way too many women. If this is true for a developed country like America, we can imagine what it’s like in poor countries.

At age 17, I started therapy and medications for depression and anxiety.

Here’s where medical doctors and psychologists step in for their piece of the pie. This well meaning professional with little to no sex education labels the situation a “disorder” and out comes a drug prescription to the delight and profit of Big Pharma!

At age 19, I met my husband and for the first few years we lived abroad. We had sex like rabbits, fast and often and I loved it (though I never actually had an orgasm during intercourse.)

Similar to her masturbation pattern of pillow humping with no climax, she’s now getting fucked without orgasm. Since their fucking is quick, it’s less painful, so she loves it even without the benefits of orgasm which are numerous. Orgasm releases oxytocin, a special hormone that creates emotional bonding. Another important aspect to orgasm is how it drains blood from both engorged sex organs that has created their erections. Without an ejaculation, men call the remaining discomfort “Blue Balls.” When women don’t have an orgasm, they end up with a pelvic congestion that can take hours before her body returns to normal. Is it any wonder why women are so cranky or irritated after sex when they’re left with “Blue Clits?” Unfortunately our discomfort goes unnamed and ignored. As soon as he falls asleep or leaves, a smart woman masturbates to orgasm for her resolution. But for all the young pre-orgasmic girls, she will simply suffer through her pelvic congestion.

Once again, the “sexual assault” label is treated with ongoing therapy. Inevitably this will lead to a diagnosis of some “disease” that is simply vaginal sex without lubrication that never ends with orgasm. In order for a doctor to present a diagnosis, they often turn to medical jargon with a label of some mysterious disease, followed by a prescription for a medication that can often make things worse. Finally, her physical body is taken into consideration when she consults a hands-on practitioner.

I saw a physical therapist for a few sessions, and she told me my PC muscles were very tight (too tight!). I've tried getting off certain medications, lubricants, different positions, different toys, different lengths and types of foreplay. Honestly, the only time I don't feel this pain is when I have sex straight from waking up or after I've consumed alcohol or marijuana. I think my problem is a mixture of sexual trauma, my anxiety, and perhaps a lack of longer foreplay sessions.

My online answer: Bingo! You answered your own question. Marijuana is your best medicine and the best exercise for tight Pelvic floor muscles is doing "Squats." Just like women squatting at the rivers edge washing clothes. This will stretch and release some of the tension in your PC muscles. A more detailed description can be found on the D&R website. I believe we are our own best doctors. Listen again to what you said...."the only time I don't feel this pain is when I have sex straight from waking up or I've consumed alcohol or marijuana. Obviously, I think it's a mixture of sexual trauma, my anxiety, and perhaps a lack of longer foreplay sessions."

Next we can add the “Virginity Myth” which is based on a misunderstanding of the hymen which for most women is like a partial soft buttery covering of the vaginal opening. Many women, myself included, have no memory of “breaking their cherry.” What a ridiculous concept! The pain women deal with during first time penetration is based upon tight pelvic muscles, lack of additional lubrication, the absence of sexual arousal and fear of pregnancy. Bleeding is caused by small tears in the vaginal lining.

Mentions And Related Topics
How to Orgasm with Partner