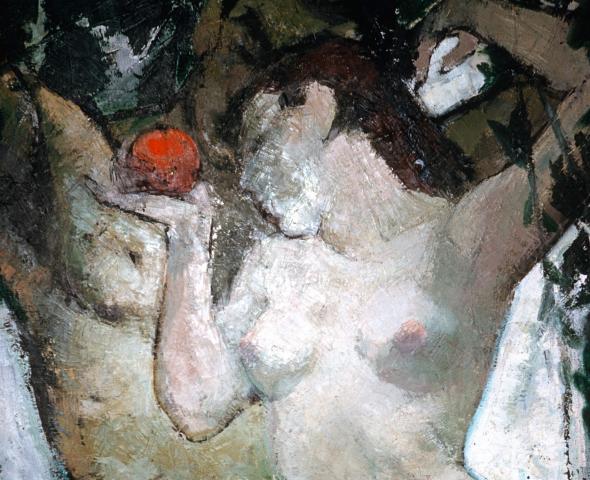 What Do I Do with My Desire? I come to you with a heavy and ambivalent heart. I’ve been married to my husband for 13 years, and we’ve been together for 17 years. I’m 39, he’s 44. When we met I’d had a handful of sexual partners, only one in a committed relationship. He’d had probably two handfuls, with two or three serious relationships, neither terribly healthy (there was cheating and drama). He was ready for marriage before I was, but I entered into marriage with an open and willing heart, at age 27.

Our sex life in the early days was good, very good at some times. In the interim, we’ve had two kids, who are now 9 and 7; pregnancy, birth, breastfeeding, childcare, financial stress, the usual etc. etc. have gradually pulled our focus away from our sexuality. We have also been struggling with resentments of various kinds that have built up over the years. We have been in therapy together for the past year, and have made a lot of progress dealing with these issues, but there’s still work to be done. We have a basic foundation of great love, but I admit to being impatient with progress and to wondering at times whether it’s too little too late. Ultimately, though, I am committed to working on our relationship in all its facets and to keeping our family together in one home.

Enter to all of this several months ago: we go camping with two other families. One night after the kids are asleep, we go skinny dipping in the lake. Some of the women (including me) start kissing each other, then we all start kissing and fondling each other. I am in heaven. The multiple hands and mouths on me are exhilarating, and I enjoy particularly kissing the couple we know the least, particularly the man (I’ll call them Sally and Sam). At some point I notice my husband isn’t participating, and I encourage him to do so. He declines, and I am so caught up in the moment that I don’t give it too much thought.

Over the next weeks and months, we discuss what happened in fairly great detail, both on our own and with our therapist. My husband makes it clear that he was extremely uncomfortable and had no desire to participate, though he became very aroused. I told him I would have found it very exciting to see him kissing another woman; he did not have the same reaction at seeing me with other people. He found it very upsetting, and he worried about where it would all lead, how it would affect our friendships, what if the children had seen us. But he also told me he didn’t want to hold me back, which I interpreted as an opening to future possibilities.

Meanwhile, our sex life became electrified. We went from monthly sex to daily sex in the immediate aftermath; I was insatiable, newly sexually awake, constantly aroused.

We continued to see Sally and Sam socially. Over the course of several conversations with Sally, I learned that they have an open relationship, and that Sally is bisexual. I told her how much I enjoyed the lake experience, but that my husband had a very different reaction. Sally and I both expressed interest in future encounters, and shared the hope that my husband would come around. I look forward to any time together with them, but there’s no physical contact.

A few months later, the same group of people gets together for another weekend away. And, late one night in the hot tub Sam and I have another encounter. I’m naked, he massages me and holds me. Our spouses are both sitting by the fire nearby, none the wiser. I find it extremely exciting. I don’t tell my husband about it.

A few weeks later, after meeting a friend out, I meet up with Sam and Sally. I tell my husband that I’m meeting them. After going out for a drink, we go back to their house and have a make-out session all three of us. I’m dizzy with desire, but end things before they progress too far physically. Two weeks later, we have a similar encounter, also at their house. Again my husband knows I’m there, but I don’t tell him what happens. The secrecy arouses me even more, but I am not without guilt/hesitation. I fantasize about Sam constantly, and exchange flirtatious texts with Sally, and occasionally with Sam, all of which I promptly delete. Two weeks after that, the four of us go out to dinner; Sam and I touch each other under the table and steal a passionate kiss in the restaurant bathroom; the next night we go to their house for dinner, at one point Sally and I take my husband into a dark room and dance closely with him while I kiss him. He’s obviously uncomfortable, and we stop.

At home that night, we fight. He questions whether I love him at all, and suggests that he should find someone who wants to be monogamous, since I clearly don’t. I don’t engage with him, we’ve both been drinking.

The next morning we talk about things more calmly. He asks me point blank if I’ve had any further sexual contact with Sam and Sally. I lie and say no. We have a series of fraught conversations over the next few days, in which he makes totally clear to me that in order to stay with me, he needs monogamy. He expresses regret and difficulty around “holding me back” or limiting me, but says he can’t be with me if I’m not monogamous. I understand (or let myself understand) this newly, and clearly. Where there was before ambiguity, now there is none. And I want to stay with him, and so I say I am willing to agree to these terms. I also sincerely understand his concerns, especially at a time when we are working hard on our relationship. Why complicate what’s already difficult?

But having tapped the amazing feelings that come with contact with new people—the release from so many pressures and responsibilities! The pure physical sensations and desire! The longing! The escape from being wife/mother/breadwinner!—it’s not easy to close that door entirely. So I’ve been incessantly reading Savage and Perel and Dodson et al, trying to figure out what to do. I do not want to leave my husband. If he knew the truth about what has already happened, he’d be devastated. I think we could move beyond it if I come clean, but I also worry that the damage to his own ability to trust, to his own self-esteem would be more harm than it’s worth. He feels vulnerable and emasculated (his words) as it is. I can’t heap more pain on him now.

And so what do I do with this desire? For Sam and Sally specifically, for future possibilities? What is the difference between lying and secrecy vs. privacy and autonomy? How do I reconcile my own emotions and desires with those of my husband?

You are between the proverbial rock and a hard place. From what you have shared your husband is a very insecure man who after 17 years of marriage still cannot trust you or himself. By the way 17 is the number when many couples get divorced. Which is what I'd recommend. I do not believe in either a woman or man sacrificing a sex life to remain married. You can wait until the kids go off to college but those are some of your best years and contrary to what Christians believe, we only get one go around in this lifetime. A sex-life is a terrible thing to waste.

All of this business of "working on the relationship" with a therapist starts to seem like a racket especially when it comes to the ridiculous concept of sustaining "monogamy" a system that is primarily practiced by women. Except in rare instances like yours where the husband is the insecure one. The truth is this system goes against human nature. We are after all, just another kind of ape! Read *Sex at Dawn* and pass it onto your insecure husband.

I'm sorry but I just can't feel much compassion for him. I too was married to a sexually insecure man who didn't like any sexual sharing because he wasn't that sexual and not very good at it. I only lasted 7 years, but then, there were no children Involved. I totally understand that's your first consideration for wanting to keep your family together in one house. With that in mind, there are just so many options.

Perhaps the best possibility would be to keep your own counsel and continue to enjoy sex outside your marriage. The "don't ask don't tell" method has worked for men throughout history. Perhaps it's time for women to take our turn. But you can't choose this path if you suspect you might begin to feel guilty and miserable. That's when we confess and blow our cover. But each experience would continue to fuel your interest in having great sex with your husband. That's the plus.

Finally you can continue therapy and "work on the relationship" which from my point of view is basically "What you see is what you got" -- a monogamous husband and a sex positive adventuresome wife. In this case you can fill in with high class masturbation and hot fantasy material. Remember, the concept of monogamy comes from organized religion so men can be assured of siring their own off spring. It's a selfish impossible concept that keeps people troubled and guilt ridden. This means we are more easily manipulated by the Church and State where many of the politicians, priests and rabbis are secretly fucking their brains out or getting blow jobs. Let me know which solution you chose.