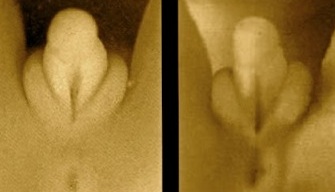 The Surprising Truth about Genitals All you fellow fans of The Penis Game out there will pick up what I’m throwing down when I say that penises can be pretty funny. We draw them in foggy windows, find them scratched into desks and even make snow dicks when the weather is conducive to winter wonderland conditions.

It’s funny (as in peculiar) that we have this response to dicks yet you rarely see blooming vulvas scrawled on a friend’s notebook. Why don’t we hear people screaming “vagina” to each other? Our free association to genitalia is so often negative. I think it’s high time we start appreciating these fabulous sex organs we have. They are good to us, so why not give them the admiration they deserve? Furthermore, penises and vulvas are not nearly as starkly different as they may seem.

Male and female genitalia actually differentiate into homologous structures.That means that at 6 to 8 weeks, parts that are the same in both guys and gals will turn into very different looking structures that often serve the same or equivalent functions. Little baby boys make sperm and a safekeeping area for their little swimmers while baby girls make all the eggs they will have throughout their lifetime.

Fun fact: as cited by Merck.com, females are born with 6 to 7 million but will release 400 between puberty and menopause. I was shocked to learn one day that at 6 to 8 weeks in the womb, male and female genitalia look the same. The structure looks uncannily like a paddle on an air hockey machine: a donut-like structure around another stucture that looks more like an end of a broomstick.

And while the dispelling or absorbing of these cells varies, the glans (head) of the penis is homologous to the head of the clitoris. However, the clitoris is a bigger organism than the glans, which is what we see and feel when touching that area. It also has two bigger internal arms that wrap around the vagina, presumably so penetrative sex feels good too. These arms, seen from a side view, appear as a shaft with the glans when examining male genitalia. This glans is for all intents and purposes the traditional “clit” we think of and is the head on the end of this shaft.

In childhood we all heard the popular mantra, “boys have penises and girls have vaginas,” but there are trans men and women out there that prove the gender binary is not comprehensive. For example, trans men that are on testosterone treatments have noticeable increases in clitoris size.

Both clitorises and penises are made of spongy tissue that swells with blood when aroused. They are also both saturated with nerve endings: about 8,000 in the clitoris versus 4,000 in the penis.

Moving south, you’d think the testes on a dude are distinctly different from the female body. But they look similar to ovaries if you think about it—which makes sense because they’re, you guessed it, homologous! And get this, before puberty they live in about the same place as ovaries do: up in a boy’s abdomen.

We need to be teaching and learning that we all differentiate from the same cells. To your next encounter with a naked body of the opposite sex you may say,  or at least let flicker in your mind, a simple “We’re not so different, you and I.”

If you want s'more sciencey yet hopefully readable info, check out my blog suzyspongeworthy.blogspot.com