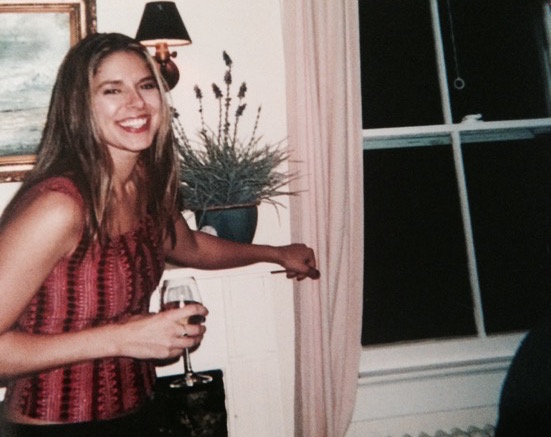 As women, I think it's easy to forget our journey. Careers, motherhood and the constant barrage of life duties and expectations keep you locked down in the present. Sometimes you need to spend an hour or two answering questions about your life story to remember.

We're finally moving forward with a documentary on Betty with a trusted producer. We don't have any creative control but feel confident that they understand who Betty is and the relevance of her work. It was totally inconvenient but I spent last Saturday, under the lights in full makeup, describing how I ended up on Betty Dodson's door step.

If you read D&R, then you know that I grew up in a Christian Fundamentalist home with no tv, no formal schooling, just round the clock shame and guilt. You were sinful from the moment you were born and needed to repent. All the natural things that kids do were demonized - cardinal sins - and all the things that happen when women are the second sex and girls are property happened to me.

Most importantly, I was responsible for male lust. I would be a wife and mother, nothing more. Education wouldn't be wasted on me. One of the pastors remarked that god must have made a mistake because my brother struggled with dyslexia while I aced every test with ease. My brother studied German. I studied shorthand for my future job in the pink ghetto before my husband knocked me up. My world was bleak, sterile, devoid of basic human compassion.

Slowly, things were removed from my environment until school was just me alone at home with a stack of outdated text books. I remember breaking down one day because I wasn't allowed to study science and couldn't describe what a cell was which didn't alarm anyone. The only time I left the house was to attend church or go to the supermarket with my mother. I wished my life away counting the days until I turned 16 and could run away. Somehow I knew there was something more out there, somewhere I could be happy. Life had to be better for me, for women.

Eventually the state stepped in and audited my parent's homeschooling curriculum if you could call it that. I was assigned a social worker and she was my first champion. Removing me from the home and placing me in foster care wasn't going to work. All I needed was a way to show colleges that I wasn't socially retarded and could succeed on my own. The local state university had a Young Scholar's Program for teens where you could take classes on campus. All I had to do was pass an entry exam. That was my ticket.

My parents saw all of this as a win for homeschooling and Christianity. They wouldn't let me attend the local high school but three days a week my mom would drop me off at the local university, in our beat up station wagon with a bumper sticker that read "I Love Jesus", for several hours at a clip. For the first time in my life, I was free. Everything sparkled. Everyone looked interesting. I was captivated by diversity: diverse ideas, diverse people, diverse experiences.

When you're raised in a fundamentalist environment, you're a foreigner in your own country. You have no understanding of popular culture or social mores. Everything is new.  You have to learn everything from scratch. I remember overhearing someone talking about "Jimmy Hendrix". I marched up to the librarian's desk and asked to take out a book my Jimmy Hendrix. They all laughed and pointed me in the direction of the audio/visual section. I sat there with headphones on listening to Purple Haze for the first time and my mind was blown right open.

I knew that there was more out there and now I'd found it.

Eventually I matriculated and knew that I would pursue a law career. To me, lawyers were fighters who could protect themselves and others. I wanted a sword. I would never let anyone enslave me again.

I guess I thought that sexism and inequality were limited to religion. I truly thought that once I moved into secularism I would be seen as a whole person. You can imagine my heartbreak when I realized I'd suffer the same plight only with some new misogynistic wrinkles.

Law school was the worst. Fellow students dropped comments about how I was accepted because I was pretty like I attached a picture with my application. If I got an A, it was because I blew the professor. As bad as it got in my parent's church, no one would ever accuse me of trading sexual favors for grades. It was nothing but sexual harassment during my internships. 50% of graduating lawyers were women but only 14% of practicing lawyers were women. I had chosen one of the most male dominated industries out there. It was depressing.

I worked hard. The wives of the law partners talked about how much their husbands respected me. I played the game but I hated every minute of it. This is when my feminist legacy started to nip at my heels.

My great great aunt was one of the first female physicians in New York City. She attended medical school and, in 1898, when she signed on to her first hospital 19 male doctors resigned on the spot. They refused to work with a woman. I held on to her strength and the image of her walking into her office refusing to cry every time I hit a bump in the road. If she could do it, I could too.

Later, she started a local clinic in Brooklyn serving low income patients who needed care and subsidized prescriptions. She employed 13 doctors and spent her days raising money for her clinic dismissing all the newspaper articles describing her friendship with another doctor as a lesbian affair. I have pictures of her in a black bodice gown with short hair standing next to her similarly suited "best friend". My grandfather adored her and spent his summers at her home in Asbury Park, NJ. She was bold, successful and never married. Together with her sisters, they marched for Suffrage down Madison Ave - past Betty's future apartment.  As a child, my grandfather was featured in Gerber baby ads because "suffragettes fed their babies gerber".

I've always felt like she was my guardian angel and I had to live up to her legacy.  As I recounted my childhood and my great great aunt, my journey became so clear. I thought that the women in my family had fought for equality and won. All I had to do was get out of my fundamentalist home and it would be easy sailing. I was wrong.

There isn't a place on earth where women live in true equality and it all starts with the sexual double standard. Girls are raised to serve one function: to please and to birth the next generation while dependent on men for their financial security. The power dynamics within our world culture are so fucked. We oppress women at every turn.

This is what attracted me to Betty Dodson: her innate sense of fairness...her courage...her fearlessness. With Betty by my side, I feel invincible. I can conquer any challenge. I don't question my abilities because she believes in me. It's what I want for every young girl - sisterhood.

We wrapped my interview and Betty was beaming. Betty doesn't think about how amazing she is...listening to me describe her influence on my life made her understand just how important she is - to all of us.

It's not every day that you go into business with an 80 year old woman. It doesn't make any sense from the outside looking in but it has been the most profound journey of my life. As we celebrate Betty's 90th birthday this August, we're both at peace knowing that her work will continue and her story won't be lost.

Here's to equality for womankind.