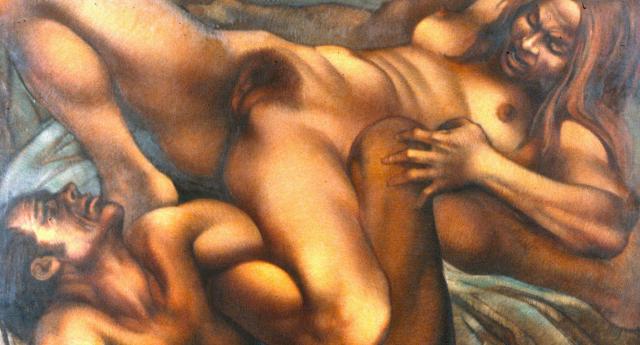 It's me again. Not sure if u get so many emails that u forget the names but I've submitted numerous questions to you, and they've all garnered wonderful answers. So here goes nothing. Yesterday my family and I made a 2 1/2 trip (one way) to an ice sculpture exhibit. The ENTIRE trip there my husband NEVER put his phone down. On the way home, same thing. I asked him if he had been facebook'n the whole time and he said no. But I could see he was interested in something. Just as a wicked grin played his lips I saw a very familiar feeling all over his face.

I asked him if he was reading erotica and he answered truthfully with a yes. No big deal, right? At least I didn't think so. This continued on all evening and when it was time for bed he was like a little kid huddled under the covers hoping not to get caught! He had spent 9 hours reading smut so I was sure about one thing, I was in for a good fucking. No, not at all what I received. Instead he turned down my proposal for sex and then continued to play with pecker.

How do I make him see that it hurt me very deeply. That I don't care if he wants to jack off but when he'd rather JO than have sex it feels like betrayal! Are my feelings are out of line?

I don't remember how long you've been married but I do know you have a beautiful child. You have every right to feel neglected after 9 hours of him acting like a teenage horn dog! However you manage to do this, next time you need to tell him what and how you felt after hours of him gloating over what? A sexy story? It must have been good for him to continue AFTER you went to bed and he turned you down when you wanted to have sex with him. I am one to explain often that masturbation is a vacation from partnersex where we get to focus on ourselves exclusively. But to be with you and ignore you for that length of time is just plain BAD manners.

Unfortunately this is what you will have to put up with so you can blame Disney and all the BS about Prince Charmings and Love Ever After. Go to our website and watch the TED talk about "Mating in Captivity" a best selling book by Esther Perel. Men long for variety and we want long term security with one fabulous lover. It's hard wired in both sexes so we are at opposite ends of desire. It will be a question of negotiating your way through this mess so you must share how you feel which he won't necessarily understand because in his mind he was just involved with a little harmless sexual entertainment.

Your solution of having your own orgasm was wise but he probably didn't even notice. Now that reality has set in, start thinking about what you'd like for some form of sexual entertainment. Humans are not designed for monogamy. A good book that helped to explain this to me was Sex at Dawn.