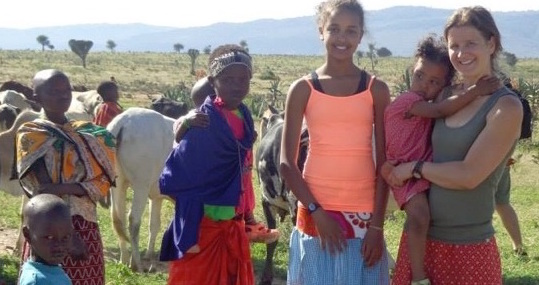 How Attachment Parenting My Children Taught Me Self-Love

When I was19 I travelled to East Africa hoping to live with and learn from other cultures. Arriving in Kenya I was told about a semi-nomadic tribe called the Maasai, who lived in Southern Kenya and part of Tanzania. Traditional way of life for the Maasai revolved around men moving cattle for grazing and water while the women took care of the children and home.

Curious, I went to Maasai Mara in southern Kenya, made connections with the Maasai and was invited to stay and learn from the women in the village. I was equally thrilled and terrified at this opportunity. Very few Maasai in that area spoke English and I knew that the cultural differences would be huge. Still, this was the chance of a lifetime and I couldn’t pass it up. I decided to do all that I could to immerse myself in their way of life. I wore their clothes, slept in cow dung houses, carried water, drank lots of milk, a bit of blood, and cared for the children.

I fell in love with a little girl named Katow, carried her on my back in the day and slept curled around her at night. One of my first observations about the children was that they seemed “spoiled.” They were always held, never left to cry for anything and were never alone. It was very different from the way I had seen children raised in Canada and I thought that if I had a baby I would let it cry in order to teach independence.

As the days went by though, I began to see a difference in the Maasai children compared to children back in Canada. They seemed happier, more confidant in their bodies and they just felt right . Because they felt right, they acted right and were a joy to be around. Babies melted into my body – used to being held and touched and a part of village life. When they wanted something they would give cues and trust that the person holding them would respond. This meant that they cried less as their needs were always met and a beautiful reciprocity between caregiver and child was created. Even their cues for bodily functions were understood and it was common for a woman to stop mid sentence to hold her baby away from her body while he/she urinated. I was fascinated by this and couldn’t comprehend how the mother, older sister or aunt knew that the baby was going to pee before it happened. There was never a baby alone. A baby wasn’t considered singular at all but a part of another person.

For the better part of five years I stayed in Kenya and developed a passionate belief in this style of parenting. I could see that the mother was teaching the baby how to express his/her needs, and that the baby trusted that the need would be met. This intimacy led to an inherent feeling of rightness in the child and provided a secure base for which their life was built on.

A couple years into my time in Kenya I married a Maasai man and my dream of being a mother became a reality. I did many of the things I saw the Maasai women do with their babies. My daughter Acacia, slept with me, breastfed on demand for two years and spent her day observing me work from her spot on my back, lap, or arms. I learnt to anticipate her needs before she told me, and listened to my instinct to touch and hold her even when others told me that she would be spoiled. In this relationship Acacia thrived. She was a fat, happy, healthy, secure baby and I was a mother learning a new kind of intimacy. She felt right and acted right and was a joy to parent. I had four more children after her : Mateyo, Selam, Matakai and Senaya and I practiced this kind of parenting with each one.

As I learnt the intricacies of each baby I discovered that they each liked to be touched and held slightly differently and favoured different areas of their body. I learnt that certain cues meant they needed help right now and other ones meant that I could wait until I was finished what I was doing. I rarely woke at night because they would nurse as needed from my bare breast beside them. They grew to be empathic, kind, and sensitive children. Relishing my role as a mother I worked hard at providing them with a base, while also being authoritative instead of permissive.

The drawback to me practicing this style of parenting was noticed when we moved back to Canada, as life here was very different. My husband went to work and it was me alone with these children all day – a far cry from the community who helped raise the children in Kenya. Still I felt extremely passionate about “attachment parenting”, as it was called in Canada, and continued to practice it proudly. My desire to support other parents, who were interested in this style of parenting, led me to become a leader of Attachment Parenting International and start a support group in my area of Canada.

My belief in the value of Attachment parenting was tested with the birth of my last born Senaya. She came out an incredibly smart but more difficult child who put to test my belief that behaviours were solely the result of parenting practices. Her cues were different than all the rest and she loudly let me know if I wasn’t doing things the way she wanted. Sometimes she cried and nothing that I tried could stop it, but I held her knowing that I could still be there for her in that moment and help her build that secure base. Because her cues were so obvious I began to notice that she got fussy before she had to pee and did not want to go in her diaper. It finally made sense how the Kenyan mother’s potty trained their infants. It wasn’t a training at all.

It was being so in tune with their child that they knew when the baby would pee and could hold them away from their bodies at the right time to prevent being soiled. At four months old I was able to take Senaya, without diapers, to the library or for long walks, stopping to let her pee when I felt her wiggle against my back. I was grateful that I had learnt the value of physical closeness and touch from the Kenyan women, so that I was better able to parent a more challenging child.

I parented this way for 12 years feeling fulfilled and proud until I slowly began to realize that I lacked my own base. Who was I beyond my roles of mother and wife? Where was my feeling of inner rightness and understanding of my own body and how it worked? I didn’t know myself, touch myself, listen to myself or know what my own cues for shame, pleasure or even sadness were. I had learnt to just exist and provide for others rather than feeling deeply inside. I felt like I had hit the bottom and I needed to change.

I told my family that I had done everything to fill their “cups” but nothing for my own. It wasn’t their fault and it had worked for me for years, but now I needed to look inward to discover who I was. What were my own needs and desires and what would give me a feeling of rightness? I thought back to my parenting and how I had gotten to know my children from taking the time to pay attention, touch, quietly listen and simple intuition. How would myself be any different? So I began by learning to dance. At first in a class and then by listening to how my body wanted to move. I changed my diet and started eating foods that made me feel good rather than just filled me up. I went to the gym and started lifting weights – something that I had enjoyed as a teenager.

As my physical body got stronger, I had more energy to look inward. I spent time walking along the river and was moved by the power of the flowing water. I read books on female sexual empowerment, pleasure, orgasm, and mind body connection but there was still something that didn’t quite click. Then I came upon Betty Dodson’s book “Sex for One” and it was all there. What I was truly lacking was intimacy with myself. I didn’t know what kind of touch really felt good for me or where. I didn’t know that I was deserving of pleasure and felt unable to really accept it.

I was looking outward for these things, but I could see that the answers were inside of me. So essentially I did for myself what I had done for my children. I listened, touched, paid attention, responded and understood. Through self touch, learning to meet my own needs, accepting my body and learning how to embrace pleasure I became my own secure base. I was learning to fill holes in myself so that my interactions with others could come from a place of strength and desire to build on what was already inside me, rather than a place of lacking and needing to be filled.

Now, when people ask me how I came to this place where I’m at – working towards being a Bodysex workshop facilitator and running my own Art of Self Loving workshop, I can honestly say that it has been a full circle. In providing the base and “filling the cups” in my children I discovered that my own base was lacking and I needed to give myself that same love and attention that I gave them. I am deserving of pleasure, I can express my wants to others but I also know that I can come back to myself when they can’t be met elsewhere. I know myself, what moves, inspires and turns me on. I am my own greatest lover.