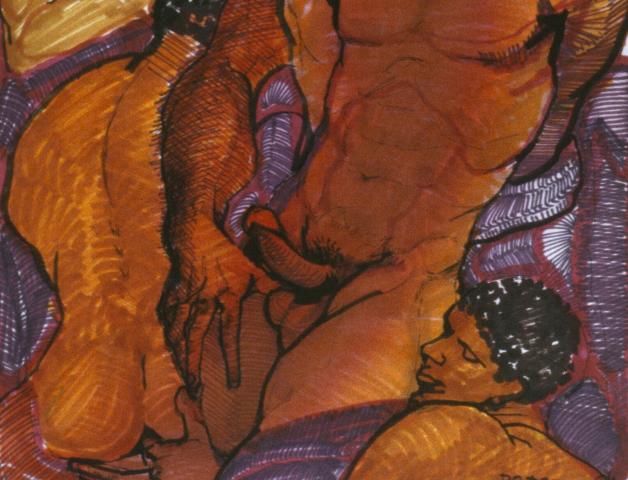 Like to Engage in Manual Sex with Men - Am I Still Heterosexual? I'm a recent college grad and took up a job as helper on a long-haul truck to make ends meet until I can find better work in this economy. On my first trip, I was totally taken off guard by constant erections and I was very embarrassed. Loose, thin sweatpants are comfortable but awful at hiding an erection...especially since I didn't wear underwear.

My driver is in his 50s but he was cool about it and sex in general. He said it has happens with a lot of young guys he's ridden with and it sometimes still even happens to him. It's from the constant vibration which stimulates the prostate and increases penis blood flow. It's common knowledge but generally unspoken among long-haul truckers. Although I have to say naked pinups in his cabin probably only added gasoline to the fire.

He said not to be embarrassed and that I should attend to it. He said it was unhealthy for me to hold back for too long and handed me vasaline. I thanked him but decided to hold it till the next rest stop 2 hrs down the road. You can't just pull over anywhere anytime in these trucks and he wasn't gonna do it just cause I needed to cum. By that time my pants had a large wet spot emanating from the tip of my erection and it was all I could think about. I never came so much so hard than at that rest stop.

Nevertheless, just a few hours later and I was wrestling with another erection. He kept encouraging me but I resisted. It went on like this for a few days but I wore a condom to stave off the wet spots. I began to notice a growing burning sensation when I did finally ejaculate and the stream was irregular instead of the thick, white, silky rope I am used to. He said is was probably "congestive prostatitis" which he knew about because he and others have had it too. The constant vibration of the truck stimulates the prostate and arouses an erection. If you abstain too long, the prostatic fluid from the seminal vesicles that would normally have been ejaculated out by that time backs up instead into the prostate and inflames it. It has also been implicated in the increased sexual activity of long-haul truckers in India and resulting in more STDs.

Do you think it makes men any less heterosexual to help each other out when in a situation like this?

Well, your experience is certainly enlightening. Many of us don't know this is true for long haul truckers and the Discovery Channel isn't going to mention it.

I think jerking yourself off and doing him is the only humane way to go. And no I don't think that makes you or him gay and it doesn't mess with your sexual preference of being heterosexual. I believe enjoying another man's dick is simply a sign that you enjoy your own. Nice to know there are men out there who are not afraid of another man's hard on and ejaculation. If anything this kind of experience would make you a better heterosexual lover of women. Compassion is an admirable quality.