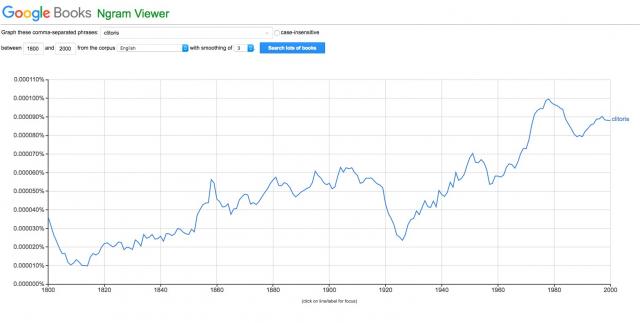 I've been playing around with Google's Ngram Viewer. Believe me it's not that technical.

Google has digitized 52 million books and made them available online.  What's interesting is that you can search keywords to see when these terms started trending in published form.  "Groovy" started appearing in books in 1968 and peaked in 1972.

The first key word I popped into the Google Ngram Viewer was "clitoris".   It first appears in literature in the 1800's.  "Clitoris" slowly rises in popularity peaking turn on the century and then dropping suddenly in the 1920s - thank you, Sigmund Freud and your belief that the only true orgasm was the vaginal orgasm.

I was having a bit of a pity party for myself yesterday.  I won't go into the details but it was one of those moments when you're home visiting family and it feels like someone punched you as hard as they could in the stomach.  It was like I couldn't breathe - like the air was sucked out of the room all at once.

When I got back to my place, Betty called.  And as I sat there on the phone I realized how fortunate I was to be working with her - how all the crazy weird shit I went through as a kid gave me the understanding to do the work I do today.  We talked about how our suffering had shaped our perspectives on female sexuality.

"Clitoris" still has a long way to go.  I hope all our bloggers are ready to take "clitoris" all the way to the top.